Why do Security Testing?

We often get asked why clients need to do penetration testing when they already do vulnerability scanning across their network. There are some fundemental differences between the two approaches and we have outlined them below. So find out why you should do security testing.

How does security testing fit within your Information Security Programme?

It’s important to understand how penetration testing fits within a comprehensive information security program. To ensure you are clear on how security testing links we provide the following simple explanation. For example, why do security testing in conjunction with other security processes. 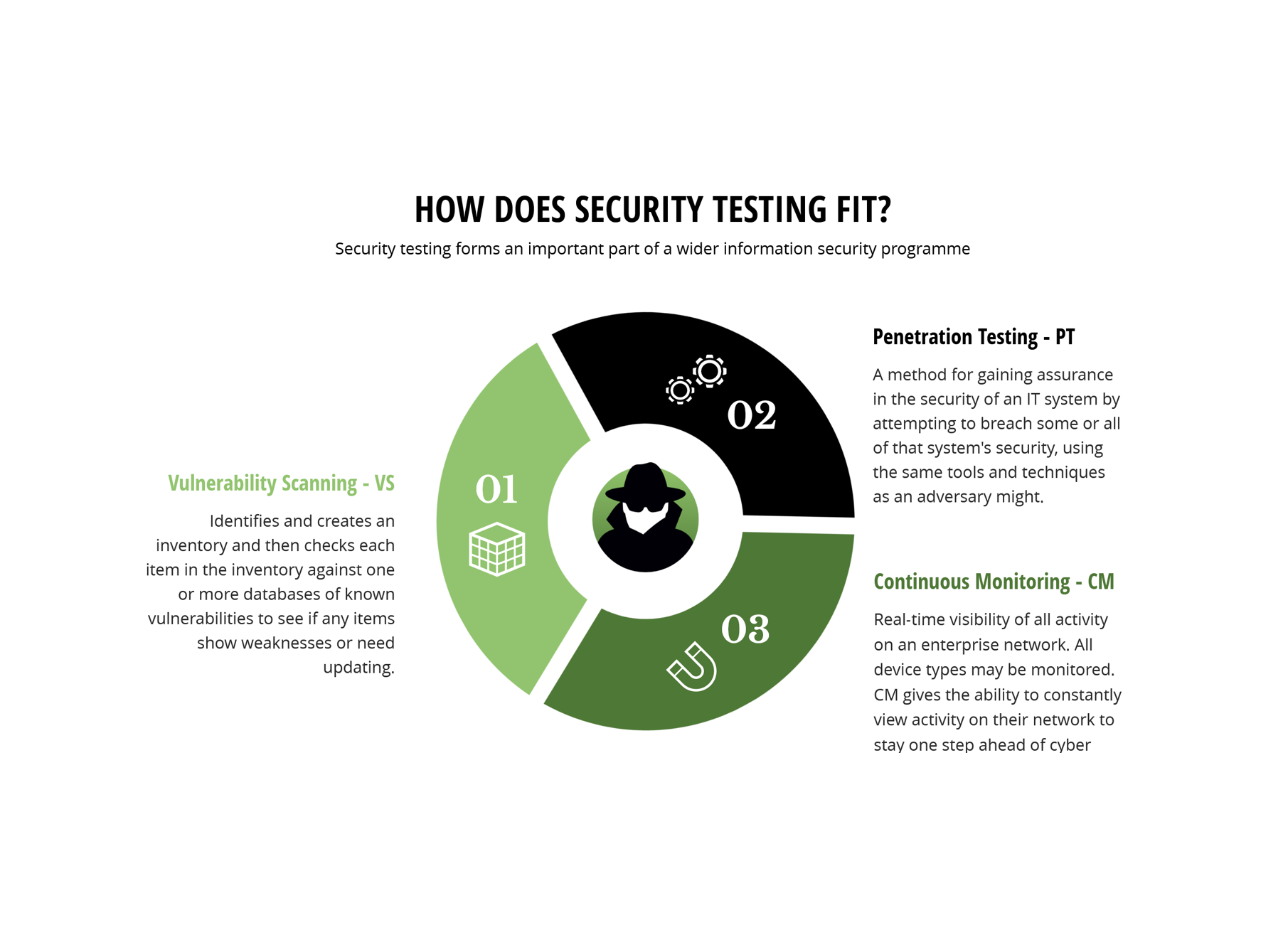 Vulnerability scanning is not Penetration Testing.

In addition, there can also be a relationship with continuous monitoring services. For example Intrusion detection or prevention systems and Data Loss Prevention processes.

Annually (or after significant change)

Example, Identify, rank, and report vulnerabilities that, if exploited, may result in an intentional or unintentional compromise of a system.

Example, Identify ways to exploit vulnerabilities to circumvent or defeat the security features of system components.

At least quarterly or after any significant changes to your systems, applications, processes or data

Typically, a variety of automated tools combined with manual verification of identified issues.

A manual process that may include the use of vulnerability scanning or other automated tools, resulting in a comprehensive report.

Description of each vulnerability verified and/or potential issue discovered. More specific risks that vulnerability may pose, including specific methods how and to what extent it may be exploited. Examples of vulnerabilities include but are not limited to SQL injection, privilege escalation, cross-site scripting, or deprecated protocols.

Secondly, engagements may last days or weeks depending on the scope of the test and size of the environment to be tested. Tests may grow in time and complexity if efforts uncover additional scope.

Why do security testing?

Penetration testing involves the use of a variety of manual and automated techniques to simulate an attack on an organisation’s information security arrangements. In addition, it should be conducted by a qualified and independent penetration testing expert. To clarify they are sometimes referred to as an ethical security tester. Penetration testing looks to exploit known vulnerabilities but should also use the expertise of the tester. For example, the expert should identify specific weaknesses and unknown vulnerabilities in an organisation’s security arrangements.

Finally, the penetration testing process involves an active analysis of the target system for any potential vulnerabilities. For example these include poor or improper system configuration. Both known and unknown hardware or software flaws. Operational weaknesses in process or technical countermeasures. This analysis is typically carried out from the position of a potential attacker and can involve active exploitation of security vulnerabilities.

What can you Test?

A Penetration Test is typically an assessment of people, building, IT infrastructure, networks and business applications to identify attack vectors, vulnerabilities and control weaknesses.

The two most common forms of penetration testing are:

Infrastructure penetration testing – which examines servers, firewalls and other hardware for security vulnerabilities

Other forms of penetration testing are also popular, which include:

The main drivers for security penetration testing include a high degree of concern about:

Compliance – a growing requirement for compliance to regulations and standards

Suppliers – use of a greater number and variety of outsourced services

However, establishing and managing a suitable penetration testing programme can be a very difficult task. This is true even for the most advanced organisations. When performing penetration tests, some organisations adopt an ad hoc or piecemeal approach. Often depending on the needs of a particular region, business unit or the IT department. Whilst this approach can meet some specific requirements, it is unlikely to provide real assurance about the security condition of your systems enterprise-wide.

Consequently, it is often more effective to adopt a more systematic, structured approach to penetration testing as part of an overall testing programme, ensuring that:

There are many reasons why an organisation may wish to choose AVORD as their security testing provider. For example we can help meet the challenges outlined in the previous section.

Other challenges highlighted included difficulties in:

In order for these challenges to be identified and addressed effectively, an organisation should adopt a systematic, structured approach to penetration testing. This should also be part of a wider penetration testing programme, including the selection and management of external suppliers.